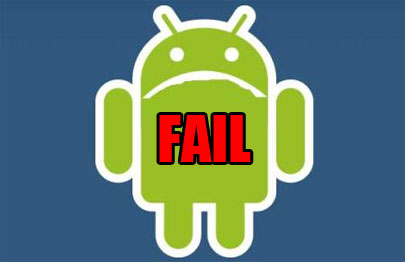 A client visited me the other day at my request.  He had gotten a brand new Android phone from Verizon, running the latest OS 4.3, and could not connect to one of my company’s secure email servers using it.  I thought that was strange considering my wife had only recently gotten rid of her Android but had been able to connect for years. I wanted to see for myself what was going on.

The client had called Verizon tech support three times earlier in the week.  One person told him that only Gmail and AOL accounts could connect through the Android, but yet they banged their head against the wall with him nonetheless, trying in vain to get it to work as it should. Surely Gmail and AOL weren’t the only email services available on the Android?  I mean, it’s open-source software run by the “don’t be evil” guys… Right?

The Secure POP3 settings, ports, server name, username, and password were all correct.  Yet the error message persisted:  “Error connecting”.  We tried manual  and auto-detect.  Invariably the android software tried to make up names of the mail server that didn’t exist, such as pop.myserver.com and the like.  I’d change the settings, and Android would put them back to the incorrect settings again while I chased my tail, just as my client had been doing for weeks.

I double-checked all the settings and even looked at the mail logs to see the device, in fact, wasn’t even connecting to the server.  We rebooted the phone.  These email problems on Android 4.3 persisted.  We Googled it.  Nothing was documented that I could find about Androids not being able to connect to standard POP3 mail servers.

Finally I decided to jump ship and have him install a 3rd Party mail client for Android called K-9.  In less than a minute he was connecting to the server, checking and sending mail.

What gives?  Could it be that Google and/or Verizon has made it so no servers other than the one’s they decree can use the default mail client on Android?  Sure seems that way.  It’s not enough that both have the lions share of their respective businesses worldwide.  Apparently they also need to sweeten their share even more by frustrating end-users and ultimately causing the majority of them who have no interest in troubleshooting these kinds of email problems to throw their hands up in the air and resort to only using Gmail.

More and more it appears Google and/or Verizon are blatantly turning to the sleazy side of the force, protecting their market share at the expense of end-users’ acquiring brain damage trying to make things work as they have in the past.  This is almost identical to how Microsoft behaved back in the 90s out of fear of the competing browser Netscape – breaking things so users relent and only use their product.

One shouldn’t have to bail on the default mail client of any OS just to get it to work.  Yet that was the solution in the case of Google Android.  Hoping this saves someone time.

This entry was posted in Google, Uncategorized. Bookmark the permalink.